Celebrating 20 years of partnership between Jisc and JSTOR

Forty academic, library, and publishing leaders from across the UK and U.S. gathered at Pembroke College on July 3, 2018 to commemorate a two-decades-long relationship between Jisc and JSTOR, two organizations jointly committed to using technology to advance research and education.

JSTOR is well-known to Pembroke faculty and students as a high-quality digital resource, while Jisc provides many technology-related services to Oxford and across the UK higher education sector, including the Janet network and digital content.

In 1998, JSTOR was little more than an idea; its database included just 47 journals. Meanwhile, Jisc had received a mandate to help to build shared library resources, in part the result of the Follett Report, which advised how UK higher education could grow to serve increasing numbers of students. Jisc invested in JSTOR and enabled participation among UK colleges and universities. The arrangement also included hosting a mirror site of the JSTOR database at the University of Manchester, both to support faster access and to provide assurances around the long-term viability and continuity of digital access. Signaling the importance and unique nature of the relationship at the time, the JSTOR-Jisc agreement was signed at an event at the U.S. Embassy in London in 1998. 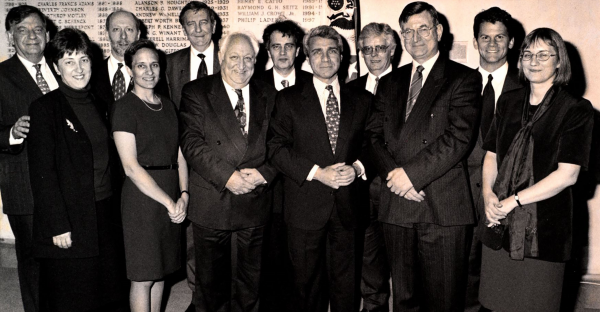 Attendees at the Jisc-JSTOR agreement signing at the United States Consulate in London, April 1998

Twenty years later, the organizations have much to celebrate. Nearly 200 UK higher-education institutions participate in JSTOR, and their faculty and students are among its heaviest users across the world. Together they have accessed content on JSTOR 116 million times in the last 4 years. One hundred fifty different organizations in the UK, from university presses to learned societies and libraries, now make their content accessible through JSTOR. JSTOR was also among the first of what would become many efforts made by Jisc to vastly increase digital content available to faculty and students in the UK.

In attendance at the event were several people that spearheaded the Jisc-JSTOR relationship in the beginning, including Pembroke Master Dame Brindley. They were joined by current UK library leaders and several JSTOR content contributors, including representatives of some of the oldest learned societies in the UK.

The tone of the event was celebratory but equally visionary. Professor Derek Law closed with a talk entitled Carpe Diem to encourage the kind of imagination, hard work, and collaboration brought to bear in 1998 to take the organizations forward as they look to the next opportunities to dramatically impact research and education.